[Chronicle, May 12, 2022]  Surrounded by family and friends, Frank Condello II was ordained into the transitional diaconate at Epiphany Episcopal Church in Honolulu on Wednesday, April 27, 2022.  The ceremony was particularly meaningful, after two years of pandemic restrictions that put his "journey to ordination" in unchartered territory.  Like the rest of the world, life during the pandemic was turned upside down, completely changing the way we normally do things. Frank's ordination, which should have taken place months ago, was worth the wait as restrictions relaxed and folks could gather in person to celebrate this milestone with him.  (Pictured below from left, the Bishop blesses with laying on of hands during the ceremony; Fr. Chris Bridges and Frank's wife Leah place the deacon's stole on him; Frank stands with fellow deacons, Bob Steele and Archdeacon, Steve Costa.) 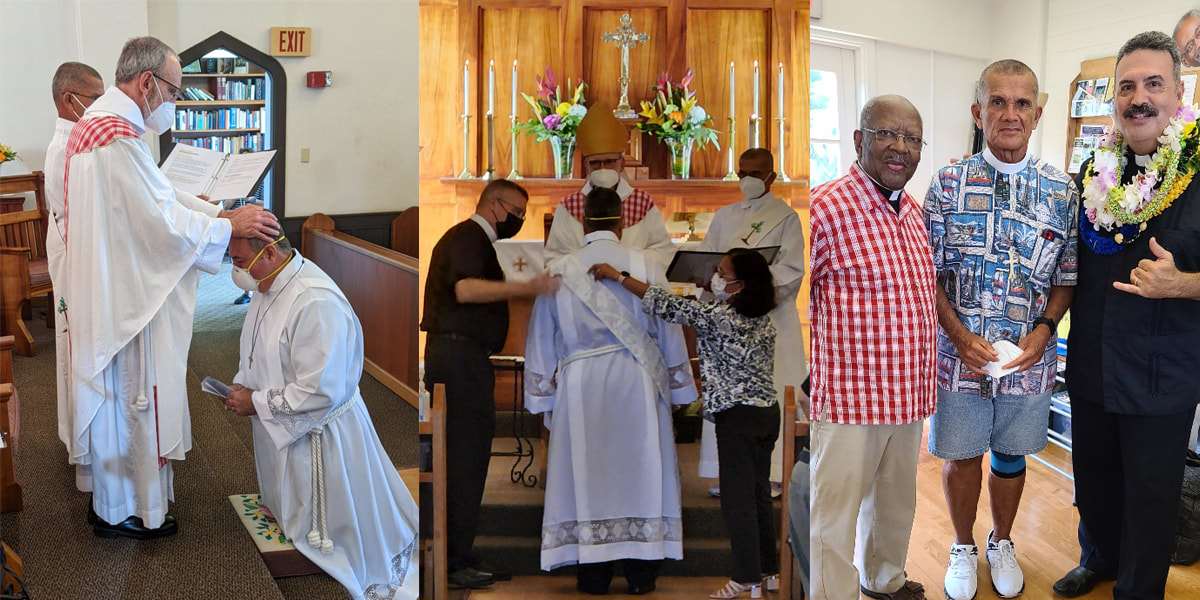 At 53, Frank's dream of becoming a priest would have remained long-buried, had it not been for a life-changing accident and the Diocese's Waiolaihui'ia Center for Ministry (WCM, formerly known as the Waiolaihui'ia Local Formation Program).  On Christmas Eve, 2016, working as a police officer with the Honolulu Police Department, Frank sustained severe injuries in an accident that left him bed-ridden for weeks and then unable to walk without the help of a walker for months. It was during this downtime that he learned about WCM, and how someone could become a deacon or priest in Hawai'i without having to attend seminary on the mainland.
REKINDLING A DREAM - At the age of 25, Frank experienced a religious vision so profound, that the memory of it is as vivid today as it was 28 years ago. At the time, it fueled a deep desire to serve God in a more meaningful way, but as a young adult with a promising career in criminal justice ahead of him, that desire would remain buried for decades.  Still, he remained active in church life, nurturing his deep faith.

​Frank graduated from Seattle University in 1991, cum laude, with a degree in Criminal Justice. After a few years working as a state probation and parole officer, he transferred to Hawai'i under U.S. Federal Probation, where he became the lead Firearms and Tactics Instructor, and was in charge of the Witness Protection Program for Hawai'i. During this time, he was able to counsel prisoners, oftentimes acting as a social worker. He created a work force development program and for those who expressed a belief or desire to learn about God, he tried his best to help strengthen their faith and straighten out their lives.

​After 21 years, he retired from Federal Probation to take care of his dad.  He later joined the Honolulu Police Department where he was working until that fateful day in 2016. 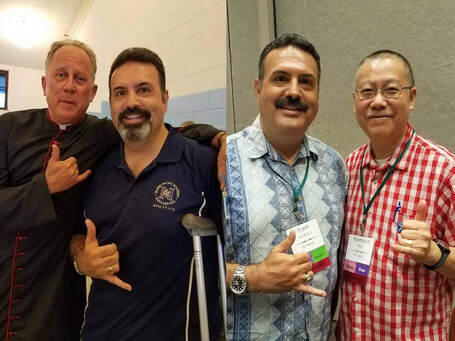 Sidelined from the accident and his future as a police officer in limbo, Frank began checking out educational opportunities on the Diocese's website when he came across Waiolaihui'ia. Curious, he clicked on the link and was surprised to learn about a program designed as a bi-vocational alternative for those who feel called to serve, but are unable to attend a mainland seminary due to family, financial, or occupational obligations.  Something stirred. Could WCM be the answer to a long-held dream?​

Curious about the possibilities, he called upon the Rev. Gregory Johnson who had visited Frank during his rehab, and invited him to attend their midday "tri-church" Bible study classes.  Father Gregory was the interim priest at St. Mary's at the time, and after hearing of Frank's interest, quickly got the wheels rolling.  He garnered support for Frank's desire to become ordained, and formed a discernment group at St. Mary's that would become his sponsor church.

The Rev. Ray Woo of St. Luke's, who was also a part of the tri-church Bible study classes as well as a teacher with WCM, would eventually become Frank's spiritual mentor.  (Pictured above at left is Fr. Gregory with Frank, still on crutches recuperating from his accident, and at right with Fr. Ray Woo.​)
THE JOURNEY BEGINS ​​- In August 2017, Frank, along with six other students, formed WCM's third class.  Although the program format has changed and evolved since its inception in 2013, it still begins with a year of discernment to explore the meaning of ministry (lay or ordained). It is then followed by three years of intense study, worship and service, and students are required to attend monthly weekend classes.

It was during the first year of discernment that eventually all the students in the class dropped out, except for Frank.  Undaunted, he perservered through the following three years that included the turbulent effects of the pandemic.  In 2020, the monthly in-person gatherings went online.  But despite the ups and downs, Frank remained focused and optimistic, and was especially grateful for the efforts that the teaching clergy made to help fill the void left in a class of one.  Former students (now priests in the Diocese pictured at the very top) were invited to provide active dialog and discussion during classes. It's a bond that Frank cherishes. 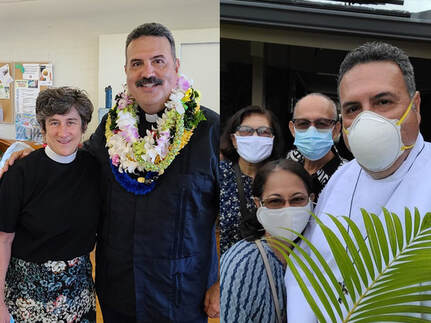 During their course of study, students are assigned to churches as interns and then curates, to learn and gain hands-on experience. ​​During his third year, he was assigned to Holy Nativity in Aina Haina, under the guidance of the Rev. Libby Berman and the Rev. Deacon Bob Steele, who took Frank under their wings.

​Berman had just recently arrived in the islands when the pandemic shut things down in March of 2020. While churches scrambled to find alternatives, the challenge was especially harsh for Frank and Libby who were both new in their roles. The church soon offered online services, and Frank was able to deliver his very first sermon!

Frank stayed at Holy Nativity through the completion of his course on July 31, 2021.  (Pictured here at left is Frank at Holy Nativity with Berman and at right with his wife Leah and her auntie and uncle.  The photo was captioned on Holy Nativity's Facebook page dated July 24, 2021: "Thanks for giving us your inspiring sermons, Book of Acts course, and compline services Frank, we will miss you!")
"It really feels like home," said Frank about his time at Epiphany.  Although he would be perfectly happy to stay with this warm and caring congregation, he knows that he will likely be transferred once his curacy ends. "I understand why the Bishop has us serve in different congregations," explained Frank, who attended St. Timothy's in Aiea for 15 years, The Cathedral of St. Andrew, and St. Mary's. "Each church has its own culture and [demographic] that can be very different from each other." ​

Asked how his family felt about his decision to become a priest, Frank shared that his wife, Leah, was very supportive.  Although she grew up in the Roman Catholic Church back in the Philippines, they were married by a Lutheran pastor in 1999, and after their son was born in 2000, they "officially" became Episcopalians at The Cathedral of St. Andrew.  His son, Frank Condello III, will be graduating from Belmont Abbey College this month, and like his father, is readying for a career in criminal justice as a detective. (Pictured above is Frank with his family and Fr. Chris at Epiphany.)
LOOKING TOWARDS THE FUTURE - Frank has since returned to work in HPD's Police Commission as an Internal Affairs Investigator. If all goes according to plan, God willing, Frank will be ordained into the Presbyterate towards the end of the year, finally fulfilling a life long dream.

Being able to work and still serve God in this deeper capacity, is something Frank didn't think was possible just a few years ago. He encourages others who are seeking to serve in a more intentional way, to look into WCM. Further below, learn about WCM's latest news and upcoming classes for both lay (NEW!), and those interested in becoming a deacon or priest.​