[Chronicle, September 8, 2020) Editor's note: When the organizers of the Province VIII annual meeting of the Episcopal Church Women picked Hawai'i as the site for their next meeting, they could have never known a pandemic would dash their dreams of gathering in paradise. The event went virtual but nevertheless, Louise Aloy, President of the Hawai'i ECW, went all out to bring some "real" aloha to participants so far away.  The following is Louise's report on the Province VIII Annual ECW meeting. 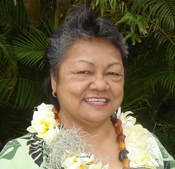 ​Last September, Province VIII ECW met in Phoenix, AZ, and I attended as a delegate from the Diocese of Hawai’i ECW. I made a short presentation about Hawai’i ECW hosting the 2020 Annual Meeting. I had already made connections and secured the site with costs and services available. Women from Alaska and all down the west coast were very excited and many couldn’t wait to start making plans to attend. After all, who wouldn’t want to come to beautiful Hawai’i for a women’s meeting and retreat.

A few months into 2020, COVID-19 hit the State of Hawai’i along with most of the United States. Decisions had to be made by the board and finally in June, when things were not looking good for traveling, the live meeting was cancelled. We immediately started the ball rolling to go virtual.

Just about every other Sunday we were meeting via Zoom to discuss, plan and finally put things into action. It took lots of discussion among the six board members from CA, WA, UT and HI. We deliberated, prayed, discussed, prayed more and as each person was given various tasks to do, we did it all by the grace of God. The Holy Spirit was alive and well and led us into new territory; new grounds a few of us were not very familiar with. We have all been participants of Zoom meetings but never the hosts.
​Knowing how the US Postal Service was bogged down with extra mail since the pandemic, I managed to get most of the packages out two weeks ahead. This gave the women some time to sew their lei and prepare their Hawaiian attire when it was time for the virtual meeting.

We were elated and nervous at the same time. We were very happy with how many signed up, but hoping the virtual meeting would go smoothly.  ​On August 2, we held a Zoom rehearsal and finalized the agenda for what was to take place on August 7 and 8.  And then, it was time for the meeting! 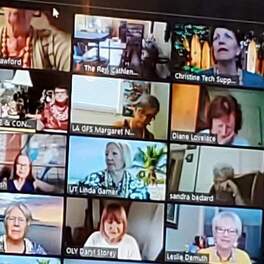 Friday’s “Pau Hana” Time began at 5:00 pm (Central Pacific Time), and in Hawai’i, it was 2:00 pm. There were a total of 50 women that “zoomed” in for “Pau Hana” time where old friends got a chance to reconnect and new friendships were made. It was amazing to see so many faces through the gallery view in Zoom.
​
Saturday, I woke up at the crack of dawn to be ready at 6:00 am Hawai’i time for our next session. We began the meeting by showing the video made for the Diocese of Hawai'i's Sesquicentennial, Grace & Beauty.

The business meeting followed with voting on revised By-Laws, and elections for the new officers for the 2021-2023 term. During the morning break, we held hularobics with a Hukilau hula lesson. It was fun for the women who got out of their seats and learned how to hula. Picture that in your mind! It was so much fun to watch. 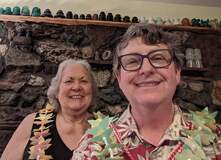 There were two workshops for the afternoon session. The first was on Forgiveness-Ho’oponopono and the second on how to keep ECW alive and well in these times of uncertainty. Women shared about the many ministries taking place in their churches and what they were doing to stay connected and still serve their wider communities.

​After six hours on Zoom, it was time to end our virtual meeting with a prayer service led by our ECW Chaplain, the Rev. Mary Janda, retired priest from Utah. In addition, the Rev. John Hau'oli Tomoso graced us with his beautiful closing prayer in ʻŌlelo Hawai’i. It was a full “chicken skin” moment.
​
The board felt blessed that it went so well, and I am still receiving thank you cards and emails from women across the US for a great first virtual annual meeting for Province VIII ECW.
To learn more about the ECW in Hawai'i, visit the Diocesan webpage HERE. To go to the National ECW website, click HERE.
Contributed photos.  At top in the header are the lei included in the Aloha Package.  At bottom, are friends from the Diocese of Arizona ECW. Winnie up front is the newly elected Secretary/Treasurer for Province VIII ECW. They loved making the paper flower lei.
The Episcopal Diocese of Hawai'i | 229 Queen Emma Square | Honolulu, HI  96813
(808) 536-7776 | Fax: (808) 538-7194 | www.episcopalhawaii.org
Contact Webmaster | © 2019 The Episcopal Church in Hawai'i. All Rights Reserved.