Mother Mahi was also one of four in the first graduating class of Waiolaihui'ia, the local formation program that was launched in January 2013.  She is pictured above with her fellow graduates (Malcolm Keleawe Hee, Paul Nahoa Lucas and John Anson Hauʻoli Tomoso). They were ordained to the diaconate during the 47th Convention Eucharist  that took place at St. Alban's Chapel ('Iolani School) in 2015 (Convention XLVII, October 2015).  All  were ordained to the priesthood in 2016, and the three men continue to serve in the Diocese.

Their ordinations marked a turning point for the Diocese. The 3-year program provides an opportunity for Hawai'i residents to explore and pursue a calling to become a deacon or priest.  It is designed especially for those who have families and/or occupational commitments in the islands, and would be unable to go through three years of seminary on the mainland.  For most, it is a second career, and the fulfillment of a calling that had been put on the back burner.

​Below, Mother Mahi shares a reflection on her journey:

Thank you for your faithful service and inspiration!

A Reflection by The Rev. Phyllis Mahi Beimes... 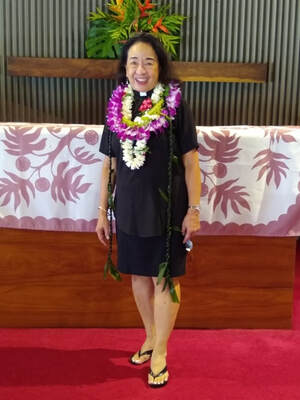 ​Ke Akua has been very important to me for as long as I can remember.  I have been blessed all of my life and in return I have always wanted to be a blessing to others.

I was a member of the Commission on Ministry in January 2013, when our Diocese began local formation of clergy via a brand new program.  Initially, the first group consisted of three men:  Malcolm Keleawe Hee, Paul Nahoa Lucas and John Hau'oli Tomoso, who suggested its name, Waiolaihui'ia ("the gathering of living waters").

I had just retired from my job at Pearl Harbor Naval Shipyard in December 2012 after 38 years of federal civil service.  I have always been a strong proponent of equal opportunity for men and women and I saw an opportunity to participate as the only female to make the initiative more inclusive and egalitarian.  So I invited my way into the formation group.

The four of us, all of whom also happen to be part Native Hawaiian, formed a really close bond of friendship and fraternity, especially during our formation weekends at the convent up in Kalihi Valley. It was a perfect fit for me at that time and place in my life.