[Chronicle, June 6, 2020]  In 2009, Bishop Robert Fitzpatrick appointed the Rev. Cn. Franklin and Norma Chun as Chaplains to Retired Clergy Families in the Diocese.

Over the past ten years, they developed and maintained a wonderful line of communication with retirees and widows, set up monthly gatherings and activities, and tried to visit as many as they could, both locally and abroad. They started a newsletter that was chock full of stories from their constituents near and far. They gave updates on those who were unable to write in, and shared tips on health, finances, scams, and everything in between. They made sure to send out birthday notes and get well wishes, and still found time to volunteer at Diocesan events.

​In 2017, the Chuns were recipients of the Bishop's Cross, an award presented by the Bishop in recognition for their years of selfless service to the Diocese. Now, after a decade as Chaplains, the Chun's have handed over the reigns to the Rev. Alison Dingley and Willis Moore, leaving gigantic shoes to fill.

We give thanks and praise to the Chuns for blessing the Diocese through this ministry with incredible energy, humor, and compassion!

Below is a reflection by the Chuns about their time as Chaplains:

The Rev. Cn. Franklin and Norma Chun
​How it began for us:

In the Summer of 2009, the Bishop (Bob Fitzpatrick) approached me, asking whether I’d be interested, along with Norma, in being the Chaplains to our Diocesan Retired Clergy Families.  Without hesitation, I immediately exclaimed, "Yes!  Of course!  Accepted!"

The Chaplaincy program is a CPG (Church Pension Group) program designed for every Diocese.  The directive reads, "This is an extension of the Bishop’s ministry, thus enabling and enhancing the Bishop’s pastoral care as chief pastor."  It is also motivated by this Scripture, "Let us visit our brothers and sisters, and find out how they are getting along."  (Acts 15:36).

When the official list finally arrived from the New York office, the numbers totaled 150+ for Hawai’i.  Not expecting that large a number, I was floored!  The list included clergy & spouses, and widows, living in the Islands, as well as those who lived elsewhere, yet who are still associated with Hawaii;  Plus, the list included those from other Dioceses, who have made the Islands their retirement home!

Deacon Nancy Conley
​It’s a “shared ministry,” with kudos to the following:

Initially, we were assisted by Deacon Nancy Conley until her passing in 2014.

When monthly lunch gatherings were begun on Oʻahu in 2011, it involved only the Retired Clergyperson and was convened by the Rev. Brian Nurding.  Eventually, this gathering included spouses with the Rev. Phil Paradine and Carol Connell (spouse of the Rev. John Connell) assisting with the convening of the group.

The retired clergy, spouses, and widows themselves, are the "eyes and ears" for our group, often alerting us when someone is not well, has died, or may be in need of any pastoral assistance. 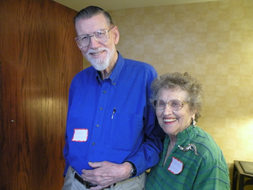 In 2011, we attended our 2nd annual Chaplains’ Conference which was held in Seattle, WA.  We were approached by the Rev. Gerald Lonergan and his wife, Geraldine (Chaplains from the Diocese of Olympia, WA.) saying that her family had, for the past two generations, a porcelain sugar and creamer set.  They felt it was now time to have these returned to the Islands, and asked us to help with the process — Both items were inscribed with this signature:  Queen Liliuʻokalani!  Needless to say, we were VERY impressed!

Brian Grieves initiated the thought in 2014, of collecting Clergy Family Stories.  Sadly, it’s only after a eulogy is delivered, that we usually come to truly know our brethren.  While folks have liked the idea of doing the sharing of stories and family histories, the practicality of coming together to do this project has been a difficult one.

52 years ago, we Chuns were newbies into the Diocese.  Today, as Chaplains, we have entered the ranks, known as "Senior Clergy."  During our years as Chaplains, 64 in our Clergy Families have gone to be with our Lord.

Of the many who have passed, how many in this smaller list do you recognize:  Mori Kaneshiro, Dorothy Turnbull, Barbara Yeh, Ken Snyder, Ken Jackson, Louise Nakamura, John Holmes, Grace Uno, and more recently, Jerry Gifford, Ron Schaeffer, Guy PIltz, and Jan Rudinoff.  Certainly, gathering family stories needs to be a priority!

And probably, the greatest challenge (even in our retirement, when we’re supposed to have great leisure) is not having enough time to do all the things that we would like to have done, with, and for all the folks in our unique ‘congregation!’  Truly, the Retired Clergy Families are a congregation, but without the boundaries of a physical building of a church structure.
Post-Pandemically:  What do we want to do?

My pipe dream is to sail the Christmas markets in Europe with Norma, even though I dislike cold and snow and having to layer clothes. Some time after that, I’m thinking of a visit to Hong Kong Disney.

I’ve been a comic book collector ever since "small kid time" — Superman, Batman, and other super heroes;  Classics Illustrated (which helped me pass Senior Literature Class in high school);  Disney; movies and television based; Westerns; mysteries.  I’d like to make a dent in re-reading my collection!