[October, 2019]  Each year, on August 6 and August 9, community leaders and clergy gather together in peace and remembrance of the 1945 bombings on Japan during WWII.  The bombs, which devastated Hiroshima and three days later, Nagasaki, brought an end to the war.  This year marks 74 years since the bombings, and the peace that followed.

In Japan and around the world, peace ceremonies are held.  On O'ahu, the ceremonies remember those who died and recognize the long-standing relationship between Hawai'i and Japan.  The ceremonies also helps spread a prayer for everlasting world peace.  A number of clergy from the Diocese of Hawai'i take part in the ecumenical services. 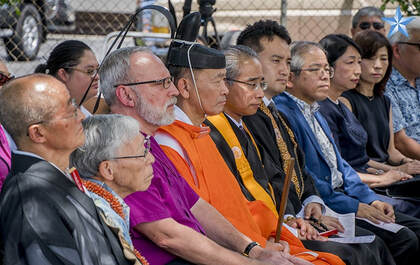 On Tuesday, August 6, 2019, officials in Hiroshima held a somber service, with the memorial bell ringing at 8:15 AM, the moment the atomic bomb exploded over the city.

“Every year in August I remember what I went through in the city that was completely wiped out by the bomb,” said Mr. Miwa.  “And then when I got there in the morning of August 15 nothing was there. I was the only person in the city.”

Mayor Kirk Caldwell and students from Minami High School also spoke. Pictured at top is Mr. Miwa ringing the bell, along with Bishop Daiya Amano from Izumo Taishakyo Mission of Hawai'i who had performed a Shinto purification and blessing before ringing the bell.

Pictured above right are the religious leaders and priests in attendance, including Bishop Robert Fitzpatrick.  (Photo by Dennis Oda, StarAdvertiser)

On August 9, 2019, the 26th annual Nagasaki Peace Ceremony was held at the Myohoji Mission in Honolulu, in remembrance of the 74th anniversary of the bombing of Nagasaki.  This year's opening remarks were delivered by Dr. Maya Soetoro-Ng, President Obama's sister who serves as Consultant for the Obama Foundation.

​"I had the honor of participating at a memorial service for the 74th anniversary of the bombing of Nagasaki," said the Rev. Cn. Moki Hino in his weekly news address.  "Bill Souza from the Royal Order of the Kamehameha asked me to participate and share my insights not only about living in Hiroshima, but also growing up two islands south of Tinian, where my father’s parents lived and where Enola Gay made the bombing run on Hiroshima and Boxcar made the bombing run on Nagasaki."